Yesterday was a beautiful, blue-sky day. We set out from Westcott Bay fairly early in the day, intent on working our way southeast around San Juan Island and heading up Cattle Pass to Friday Harbor, with the possibility of stopping somewhere along the way and making it a two day trip.

With no wind to speak of, we motored out away from the shore. Light wind was forecast out of the north for part of the day, switching around to south in the afternoon, but we've learned that the forecasts aren't exactly reliable here. Eventually, a breeze picked up, and we sailed along slowly for a few hours, periodically becoming becalmed but drifting in the right direction thanks to the current. After overcoming some frustration with the uncooperative weather, Zack took advantage of our downtime to row around and snap a few pictures of Blackthorn with her sails up.

We neared Cattle Pass at the south end of San Juan Island around 4 p.m. and kicked on the engine to ensure we had enough steerage. It wasn't even a major tidal swing, but the waters were plenty turbulent. Once we cleared the pass, the wind picked up a bit and we were able to continue sailing along, receiving a nice speed boost from the increasing current.

We arrived just in time to stow our sails and drop anchor before dark set in. We weren't thrilled with where we dropped, but we were in a race with another boat to claim a spot in the deep, crowded southern end of the harbor. We're about to raise anchor again while the current is calm. The bay is actually a channel wrapping around a small island, and it's a serious row from our current location to the dinghy dock, especially when the current picks up in here.

In sharp contrast from yesterday's clear skies, we woke up to dense fog this morning. Plenty of cute little seals were patrolling the harbor. 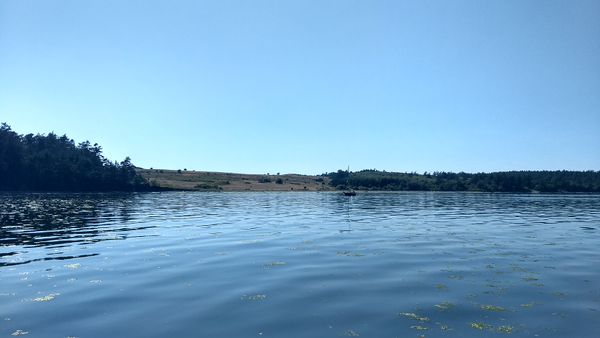 Departing Friday Harbor with May in tow.After a few days spent in Friday Harbor and a visit from family, we'll be self-isolating for the next few weeks. We set

We decided to retreat from Roche Harbor again, but I forgot to post that we had gone back there to begin with. Short, funny story: We retreated from Roche last