Poulsbo is a self-proclaimed Little Norway tucked away in Liberty Bay, northwest of Seattle. We’ve visited Poulsbo annually since we began our boating adventure, but this was our first winter visit. On December 27th we motored north out of Eagle Harbor, through Agate Passage, and over to Liberty Bay. It was another chilly gray day, and our travel through Agate Passage was dictated by the currents, which can flow at up to six knots through the narrow channel. Foul weather was also on the way.

We arrived in Liberty Bay shortly before dark and spotted a familiar boat at anchor in the harbor. It was the same Lord Nelson 35, captained by an eccentric and friendly self-branded pirate, that had been anchored there when we’d arrived in July of 2017. Aside from that, there were only two or three other boats anchored out in the bay. We motored into position but held off on dropping the anchor as a large sailboat approached, wanting to see what they were up to. The newcomers brazenly motored up to us, forcing us to back off–I was out on the foredeck with the anchor dangling past the bobstay while this happened–and dropped their anchor close to where we were planning to, forcing us to relocate several hundred feet away. There aren’t that many boats in Puget Sound, and boats happen to have unique names written on their transoms in large letters. It might well have been a chartered boat, but regardless, they left a phenomenally bad impression with us and it’ll probably be a decade before I forget that boat’s name.

With the anchor dropped a little further from the breakwater than we’d have liked, we settled in for the night. During our time at Blake Island and Eagle Harbor, the sound of the chain dragging across the bobstay during weather and changes in current had been a full-on nuisance. The anchor chain goes from the windlass out over the bow roller and into the water on the starboard side of the bobstay, a heavy chain that offsets the forces that pull the bowsprit (the spar sticking out the front of the boat) upwards. If the boat is anchored, the wind or currents will eventually pull the boat behind the anchor, with the chain extending in front of the boat. As the wind and currents change, the boat moves, often turning to port or starboard. When the boat is pointed to port, the chain is free and runs straight into the water, but when it’s pointed to starboard, the chain presses against the bobstay and can raise quite a racket, especially when there’s wave action. There’s a heavy rope with a hook, a snubber, that gets fastened onto the chain and takes up slack so that the windlass isn’t taking all of the force of the boat’s weight on the chain. This line is secured to a large post that runs down into the keel of our boat. The snubber line is also fairly noisy as it stretches and twists and does an excellent job of transmitting noise through this samson post. All of this gear is located about 5 feet from our heads over the v-berth.

The day after our arrival in Liberty Bay, weather started rolling in from the south. Winds were routinely around 10kts with 20kt gusts. Over the course of the next day and a half, they climbed to about 20kts sustained with 35kt gusts. The Sir stayed up through most of the night reading and keeping an eye on things. He watched a large tug that had pulled into the bay earlier drag anchor. They were running their engines to stay in place and eventually had to relocate. It was a stressful night for us—this was the worst weather we’d been in yet—but it was reassuring to see that our ground tackle held. The wind slowly died down over the course of the day, with more weather forecast for later in the week.

The Sir had done some research on reducing both the noise and the overall motion of the boat as the wind changes direction and the bow bobs over waves. We ran lines off the samson post through hauseholes on either side of the foredeck down to a point on the chain below the waterline and then slacked the chain above this point. These two lines create a shock-absorbing Y to help keep the chain off the bobstay and also ease the overall motion of the boat.

We put the dinghy down and rowed ashore the next day. Little had changed in Poulsbo, and the town was busy, even in the dead of winter. We later realized that this was mostly due to the holidays. (Shortly after New Year’s, the downtown waterfront became mostly deserted, with slight spikes in traffic on the weekends.) Our first day ashore was more or less a holiday as we made the rounds to the bakery, marina mart, chandlery, coffee shop, and brewery. The office at the marina gave us codes to the bathrooms and laundry, which are available to anyone anchoring in the bay, as well as customers of the marina.

We took a shower that evening, and the next day I hopped on a bus to go retrieve a bag of anthracite coal for our solid-fuel stove. Up to this point, we’d only burned wood. The idea of burning coal isn’t very appealing to me, but it’s far more practical on the boat than burning just wood. Our eventual goal, especially in light of my inability to cope with the cold, is to sail south in the winters. Anthracite coal isn’t easy to work with, either. It must be added to an extremely hot fire in order to burn and requires a specially designed stove with a grate at the bottom to burn. It can also be difficult to keep the fire going in the small stove. However, once it takes, it quickly heats the entire boat and even provides enough extra heat to boil the kettle atop the stove.

The 40 pound bag cost about $6 and fit inside the barrel next to the stove. With heating secured, we pretty much had everything we needed accounted for.

When more weather finally blew in, one of the snubber lines we’d added came off the chain, nullifying any benefit that it would have provided. We eventually hauled the chain back in and retied the line. We were finally able to test the setup when the weather worsened again after a few days. The new setup did exactly what we’d hoped.

Our time in Liberty Bay was mostly pleasant and uneventful. Both of us had some work to take care of during our stay that required a lot of time on our computers. The minimal solar output in winter couldn’t keep up with our demands, which meant a lot of rowing into shore and setting up our laptops in the local coffee shops. We spent most of our time ashore in Hot Shots Java, which was rarely crowded after the holidays. The coffee was wonderful and there were always several different roasts on tap. When we weren’t working, we spent most of our time reading, attending to boat-chores, or playing games on the little Nintendo DS that’s onboard. It turns out that The World Ends With You is a pretty fun co-op game.

The bay was blanketed with thick fog on several mornings when we woke up. On one day, it was so thick that we couldn’t even see the other boats anchored nearby. It was dead quiet and still, as though we’d slipped into an alternate dimension.

We also got to try our hands and arms at rowing in choppier conditions. On one evening, the wind had shifted from blowing out of the south as it usually did to blowing almost straight out of the west, directly down the fairways of the marina where our dinghy was tied up. The breakwater was no longer blocking the wind and the marina’s fairway was more or less acting as a wind-tunnel between the moored boats. At points we were barely making headway against the wind as I rowed. Trying to evenly propel a dinghy as it rolls over 2 foot waves and keeps getting grabbed by the wind definitely takes some getting used to. Eventually we made it out of the marina only to find a neighbor anchored at the midpoint between the shore and our boat rowing an anchor out in his dinghy to kedge his boat further from the breakwater.

Kedging a boat involves using additional anchors to move an already anchored boat. The secondary anchor is dropped, usually by dinghy, and the boat is pulled towards the new anchor. The process can be repeated multiple times. While we know about kedging in theory, we’ve never actually been in a position where we needed to use this technique. Our neighbor ended up kedging his Westsail 32 about 1,000 feet across the bay that evening and it was clear that rowing through the choppy water was second-nature to him. In another year or two, I hope that we’ll be closer to his level of comfort and confidence on the water.

The wildlife in Liberty Bay was also a delight. On several evenings and one morning, a young harbor seal trailed us to or from the boat, sometimes just a few feet off the dinghy’s transom. There was the usual population of great blue herons out on the docks and a large number of chittering belted kingfishers that would occasionally take up residence in our rigging. Out in the water there were small groups of hooded mergansers and bufflehead ducks. A few pigeon guillemots also made an appearance over the course of our stay.

After nearly two months at anchor, it was time to head in for a while. The batteries needed charging and there were a number of things we needed to take care of on shore: laptop repairs, visiting family, and check-ups among them. We motor-sailed south to Phinney Bay near Bremerton to drop anchor overnight before tying up in a small marina.

Thank you for taking the time to read through, and I hope you enjoyed sharing in our adventures! If you have any questions for me, or just want to hang out with some cool folks, feel free to hop on the Creaturista Discord server! 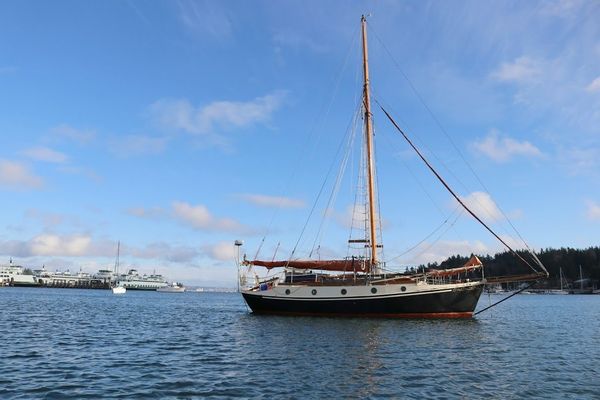 On November 29th at around 10 AM, we were scheduled for launch into the Duwamish River. The tide was high enough that the little walkway running alongside the boat ramp