I've been on the island for just over two weeks now. On the whole, it's been an   incredible experience. It takes conscious effort not to worry about the future and where all this is going. It's a day at a time. A problem at a time. A stall at a time.

It took a few days to sort out, but I now have a schedule at Kona Horseplay Equestrian Center: Tuesday, Thursday, Friday, Sunday are my days to muck(clean) the small and big barns. It's simple, intense work that takes a few hours and begins at dawn. I usually do some pre-cleaning the night before to shorten the workday.

I'm about 1800 feet up a mountain in a region where much of the land is occupied by coffee farms. From the kitchen window, I can see the sky meld into the sea. Rain comes in brief drizzles most days, torrential downpours less frequently. I have wifi on the porch where I'm working right now. It's warm enough for sandals, but I still have to watch out for the tiny mosquitoes that hang out around here.

The trailer is mostly clean, or about as clean as it's going to get, and I'm working on settling into a schedule—finding a routine that works for this new, temporary life. Last week I went exploring so much that my leg needed a few days to recuperate. I don't have a car, so I'm just becoming intimately familiar with my immediate surroundings for the time being.

Aside from writing, I've been doing some gardening. I'm trying to grow some things from seeds, others from cuttings, and a few are just baby plants that I've acquired and moved into bigger pots. In a place where the climate is so favorable and I have the time, it makes plenty of sense to grow some of my own food. Granted, I'll have to wait a while before I can eat any of it. I have chard, kale, some beans, tomatoes, oregano, thyme, lemongrass, and rosemary. Those last few herbs are allegedly natural mosquito repellents.

My host has also given me permission to gather from parts of her property, so I have access to an abundance of bananas, avocados, and tangerines. There's an area I still have to explore that likely has papaya and guava too. Whenever I'm in a store with local produce, I buy pretty much anything I haven't had before. Since my arrival, I've tried guava, starfruit, papaya, breadfruit, and dragonfruit, and they've all been quite good. The dragonfruit is my favorite. I used the breadfruit to make a big batch of Japanese curry for the first time. I've also started making my own oatmilk; it's easier than buying large cartons from the store and accumulating packaging that can't be recycled here.  Sadly, the cacao pod I bought went to waste in a failed chocolate-making experiment.

Beyond that, the time I've spent around the horses and ponies has really opened my eyes. Sometimes, I observe my host or her daughter-in-law during training sessions, and the amount of subtlety that these animals are capable of responding to is incredible. Granted, I probably know most of the horses best by their chosen method of mess-making in their stalls.

Most recently, a shaggy pony named Applejack was relocated to the paddock next to my trailer. Applejack cares only about food. When he first arrived, I watched him wander off to graze, then to try and empty a bucket of alfalfa cubes that was sitting next to a stall. Last night, as it was nearing dinner time, I looked up to Applejack rattling the gate to his enclosure. Pretty normal. Then he sticks his head through the gate and uses his body to wedge the entire thing open. Someone had left one of the latches undone. He purposefully strolls down the little hill and flips the tops off of the feed buckets until he finds one with dinner. Nothing I say or do matters to this pony on a mission. He doesn't even care about the bucket of alfalfa cubes I offer him: he has his face half-buried in a bucket already. Fortunately, he was kind enough to let me put a bridle on him and lead him back up without any further excitement.

So far, so good. Today, one of the people who helps out around the center sealed up the hole in the wall behind the fridge that the rats have been getting in through. The windows leak a bit when it rains. A cockroach the size of Stubs, one of my kitchen geckos, was patiently waiting to be let out onto the patio when I woke up this morning. Things aren't perfect here, but they're pretty damn good. 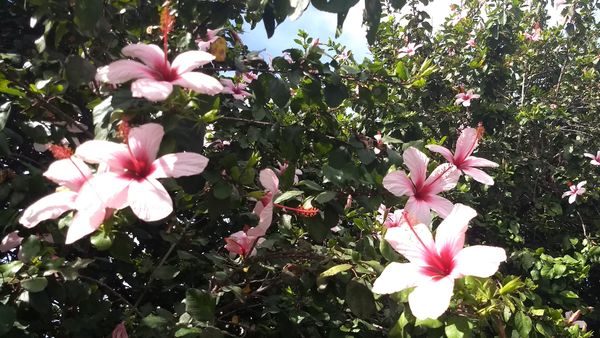 Names have been changed: this is a story about what I learned from my interactions with someone, not about that person. October 31stI’ve finally arrived on Hawai’i—the Big Island. A few hours drag by as my fellow travelers work their way