Some thoughts on quitting my job

I’d been working with the same company since I dropped out of a master’s program as the result of a nervous breakdown turned suicide attempt and desperately needed a job. I started in game QA, then popped over to production, thinking it was one step closer to working on actual game design. The production work was fun but extremely taxing. After a few years and some disenchanting experiences that were consequential to creeping up the corporate ladder while working for a publisher rather than a studio, I wanted out. When I started at the company, I was still very active creatively – I would routinely draw, write, read, and play video games. That declined over time until I mostly just had the energy to play competitive arena combat games in my downtime. That said, a solid desk-job was good money, and I had a mortgage to pay. I wanted to pursue my interests further, but was too afraid to strike out on my own.

Eventually, I became frustrated enough with my desk-job in production that I decided to find a less demanding testing job to pay the bills and free up my time. When I explained my plan to my manager, my company was kind enough to let me transfer to a testing job internally. It was good but not particularly filling work. Despite the change, I still found myself neglecting creative pursuits. During this time, my house situation took a turn for the unexpected. My choices came down to engaging in a very nasty legal battle with members of the HOA or selling my condo( and seeing out a slightly less nasty legal battle). I agreed to sell, and the end result was not knowing when I would need a new home, or when I would be paid for the home that I was selling.  People brought out the lawyers and the whole situation became very disheartening and emotionally draining. Near the end of this two year period, Zack and I decided that we would go live aboard a boat. I decided around this time that my next job would be working for myself. I’m nearly 30 – I didn’t want to look back on my life in ten years and have nothing to show for it but an uneventful career and a passable sum in my 401k.

The Road to Unemployment

How do you quit your job? According to the internet, it involves a lot of covering bases and two-weeks timing and writing nice letters to avoid bridge-burning. I’d never quit a job before and have the corporate grace of a half-plucked pigeon with a club foot. Granted, I didn’t have a whole heck of a lot to lose, but about half a year in advance of when I figured I’d have my money from the house and we’d have a boat to go live on, I sent a pretty awkward e-mail to my managers. I just explained that I needed to go be a starving artist for a while to fulfill my destiny, and that I wanted to do whatever I could to not leave behind a mess when I left. Fortunately, they were absolutely accommodating. So, I asked questions about benefits and stock options and all of the obnoxious logistics that come into play to figure out the ideal “last day.”

After leaving my job on August 1st, I started my own little company, through which I’m pursuing a number of interests and establishing (currently tiny) income streams.  The company, Creaturista, currently has a presence almost exclusively on Patreon and Facebook.

Granted, this is a very a-typical business model, where the services I offer are riddle challenges and creature design work. Beyond this, my self-imposed responsibilities are writing these blog entries, writing a high fantasy novel that probably won’t see the light of day for at least 2 more years, and improving my art skills. I also do some contract work on the side for design and editing.

When I’m not working on “work” things, I’ve been pouring most of my free time into learning more about the boat life, learning Japanese in earnest, planning my impending wedding, and reading.

Taking the Starving out of “Starving Artist”

In my case, I didn’t go into business for myself to make money. My intention is to make enough to live on and pursue my interests. Tossing out the promise of a paycheck, a substantial healthcare package, 401K matching, and all of the other niceties that come with office-life for the promise of… well, nothing but freedom, really – it was not a decision that came easily.

Thanks in large part to my upbringing, I am very financially conscious. When I received a raise, I might get a few things to treat myself, start a new hobby, or maybe eat out a little more often, but the bulk of the money would go to savings of some form and bypass my wallet. When I was in school, I made most of my own meals, bought most of my clothes secondhand or from discount stores( or just wore old ones until they wore out), and had few expenses aside from utilities. These habits mostly followed me into adulthood.

The condo I bought was bank owned and sold as-is before the market had fully recovered from the 07-09 recession. It was a good deal, despite the years of stress it brought me. I poured pay raises and bonuses into building equity, expecting that I’d need it for future repairs. By the time that I was forced to sell, the real estate market had shifted dramatically in Seattle, and I made back my equity and then some. We had enough to buy the boat outright and a stash to live on, cheaply, while I found my footing as a new business owner. Living off of savings is something I’ve never done before, and it is strange to be making this sort of investment in myself.

The “As many hours as I feel like” Work-Week

Most days, I wake up with nothing that needs to be done. I don’t need to catch the 7:15 bus, or pack a lunch, or even put on pants, for that matter. Nearly all of the deadlines in my life are now self-imposed: I need to finish a blog entry by the end of the month because I want to. Certainly, this is a double-edged sword.

On the one hand, it’s incredible to have the freedom to drop whatever I’m doing at the moment and learn that there is, in fact, a freshwater seal species. Who knew?! Probably a good chunk of Russia, it turns out. I may spend entirely too much time thinking about seals (Don’t judge me!). On the other hand, it can be appalling to realize that I just wasted 3 hours dinking around with facebook and Reuters on my phone because I was having a crappy morning and couldn’t find the motivation to be productive.

Setting goals and a rough schedule allow me to keep things more or less on-track. Even though I rarely follow the schedule to a tee, having spent time thinking about the goals that I want to accomplish helps me to refocus when I am unmotivated.

I tend to find the months of October and November particularly challenging from a mental health standpoint. It might be the changing of seasons, the stress of impending holidays, the lack of sunlight, or all or none of these factors, but during this time of year, I tend to be at my most sulky and depressed. Has it gotten better now that I don’t have to go into an office and be surrounded by people all day while I’m at my worst? Yes and no.

I still feel horrible for stretches, and it can be difficult to get out of bed. Not because I’m tired, but because the thought of attempting to do anything feels pointless. It’s also easy to feel isolated when you don’t necessarily interact socially with others every weekday. That said, I can afford to have unproductive days. When I spend a sulky day wasting time or doing nothing at all, it does not cause the same stress that sitting at my desk and barely scraping by during a funk would. In fact, this lack of stress enables me to be more productive when the fog does lift. Removing myself from the workplace and breaking my routine has not changed much about how I feel, but these moods are easier to manage with my current situation.

Nowadays, my productive hours start at 10 or 11 and end by about 6 or 7, with lunch somewhere during that time. Some days, I’ll end up working later, and other days not at all. Often, work gets done on weekends. Running errands and fetching groceries take up time, as do sailing and finding firewood.

Writing this, and really thinking about it, it’s hard to believe that only three months have passed. It feels like it must have been at least six months. This has been a very busy year, and all that said, it’s been very fulfilling.

The Wonder of Deadlines Once we had the boat fully reassembled, we did a lot of dawdling. There were some minor engine issues, and the wind instrument needed replacing. We waited for parts and put off getting the wind instrument up, worried about sending 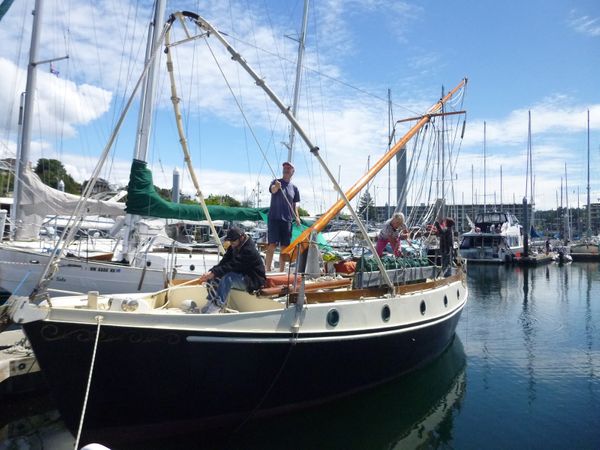 On July 1st, Blackthorn arrived at Seaview Boatyard, set to be relaunched on July 5th. On July 13th, we moved aboard with all of our belongings. Shortly after, Robin and