After reaching our mooring for the evening, we headed back out to get in a bit more practice. The wind had picked up nicely and carried us out to the surrounding waters. We went through some more tacks, and then began on jibes.

A jibe is the action of turning the stern (rear) of the boat through the direction the wind is coming from, while a tack turns the bow (front) through the wind. (Sailing carries an extensive lexicon of both useful new terms and ridiculous renamings of things that didn’t need renaming.)

In any case, tacks are relatively simple. On our ship, it mostly involved turning the wheel and then moving the jib (the front sail) to the other side. The main sail didn’t need much adjustment, and the boat would catch the wind and be on its way in no time. Jibes focus on switching over the main sail, and carefully adjusting it to prevent the boom (the horizontal spar/beam at the bottom of the main sail) from swinging violently around. The boom was well above our heads on this ship and more dangerous to the ship than to us if it were to catch the wind incorrectly.

I believe it was Franz who was first up at the helm while we worked the lines and Cam guided him through the process. Everything went relatively smoothly, though some amount of sails flapping and less than smooth shift of the main sail took place. I was up next.

I took the helm and followed Cam’s orders through a few points of sail, still having a bit of trouble orienting myself by the windvane at the top of the mast. With everything still being very new, it was (and still is) a challenge to quickly account for the arrow’s position in regards to the little guides that fall on either side of the no-sail zone (where the ship is pointed directly into the wind). When the arrow is pointing towards you, it means the wind is coming from behind the ship, and the no-sail zone more or less becomes the wind full in your sails/accidental jibe hazard zone. I managed to get the ship in line with the Cam’s orders as the rest of the crew did an excellent job of trimming (adjusting) the sails.

And then he asked me to jibe.

What ensued was basically a disaster. When Franz had jibed, I was not fully aware of what was happening in regards to the ship, being very focused on the sail line that I was responsible for. Cam instructed me to bring the ship through a jibe to a broad reach (swinging the stern of the boat about 45 degrees through the wind). So, I brought the wheel over slowly, watching the weather vane at the top to judge how far the ship had turned. When the main sail was brought over, which is not a very gentle process, the wind pushed the ship to keep it turning strongly. Things happened very quickly, and I got very disoriented about the wind direction and extremely flustered with my inability to get the ship pointed in the right direction. I froze up at the wheel with the sail flapping about and had to hand it over while I mentally sorted things out and the rest of the crew sorted the ship.

I don’t perform well under scrutiny. My general philosophy has been to practice things until I know them so well that I’m very unlikely to fail at them in front of others. When I mess up and get noticed or become embarrassed, it is close to impossible for me to not become even more flustered and incapable of fixing the situation. In the case of helming a 41 foot sailboat, it’s impossible to learn that behind closed doors.

I watched everyone else perform the jibes more or less without issue, and was silently kicking myself the entire time, too nervous and embarrassed to give it another go. Cam disappeared below decks, as he tended to do, and eventually I worked up to asking the rest of the crew if I could have another go at it. And just as I was about to make an attempt, back up came Cam and suggested we head back to our mooring for the evening.

The whole jibing situation put a damper on the evening and set me into a slight panic. I really, really needed to learn this skill and I only had however much time was spent sailing tomorrow to practice. We still had the written exam in the morning as well. My internal drama aside, dinner was wonderful. The ship had a little barbecue on the back. Though it took just about forever to cook the overly thick chicken breasts we had been provisioned with, they were all the more delicious for the wait. Chicken, green beans, and herbed fresh bread made up a simple and delicious dinner while we got to know Cam, Franz and Leah a bit better. The sun slowly set behind the pine covered islands on a perfectly peaceful evening.

It had been a long day, and by 8:30, everyone was dragging. Cam tucked in first, and we followed suit shortly after. Franz sat up studying a bit later. We hadn’t been sleeping long when we were roused by the sound of rain. It was raining hard, a chorus of loud thuds all around us. But the constant drumming eventually settled into a soothing drone while the ship steadily rocked. We were in one of two aft cabins tucked below the cockpit on deck, each equipped with a roughly queen sized bed and a low ceiling. When we woke again in the morning, the world was grey and it was still raining, but less intensely.

After breakfast, we took the written exam. There were no surprises, just a lot of material. When we’d finished, we went up top to scope things out. The rain had cleared and everything was perfectly still. The water in front of us was glass-like with small ripples. Absolutely beautiful, and completely useless for sailing.

We were prepping to motor out with Cam discussing our course when I noticed something move behind him. Sea birds seemed to be everywhere out here, but whatever I had glimpsed dipping below the water was larger and had a less organic shape. It had almost look like a diver’s flipper going down. I pointed out to where I had seen it, and in moments, we were watching a pod of orcas passing by. They were somewhere around 500 feet out from us. I’d never seen an orca in person, and it was absolutely stunning to see them surfacing. One even leapt out of the water in a breach. But we weren’t there for the whales. After a few minutes, we refocused on Cam, only to have a harbor seal poke its head curiously out of the water about 20 feet off our port side.  And then, finally, we set to motoring away from that magical little island.

It took us most of the morning to motor our way back to Bellingham harbor. Cam taught us a little about reading the charts when he was topside, and went over our tests once he’d had a chance to grade them. Everyone had passed the written. We approached the harbor sometime after noon, and thankfully, the wind was up – not so strong as it had been the night before, and I was grateful for that. We spent time doing drills – mostly driving the boat in a large circle, jibing and tacking as necessary and rotating through all of the positions. I finally had the opportunity to practice jibing again. And following Cam and the Sir’s advice I consciously oriented myself against the landscape, avoiding focusing on the windvane. It was much more doable. Anticlimactic, even.

After a few hours practicing, we made our way back into the harbor, refueled the boat, checked out Cam’s ship on a slip across the marina, and carefully settled the Wind Song into her slip. Cam gave us some parting words, helpful advice, and each of us received our certificate for the course. Overall, it was a great experience, and I learned an immense amount over the course of the weekend. For every thing I felt I now had a handle on, I also recognized there were two or more new things I needed to learn, or how much more I needed to practice a given skill so that it could become second nature.

I could recount innumerable other bits and baubles from our first sailing lesson, but I think I’ve hit on the most substantial, interesting, and exciting bits. In just two more weeks we’ll have our 103 course at the same school, with a different instructor and different ship.  Next weekend is the Boat Show. In the meanwhile, I’m still working on whittling down the massive collection of “stuff” I’ve accumulated around the house over the years- art supplies, clothing, books – you name it, I’ve got too much of it. But every day, we’re getting a little closer. 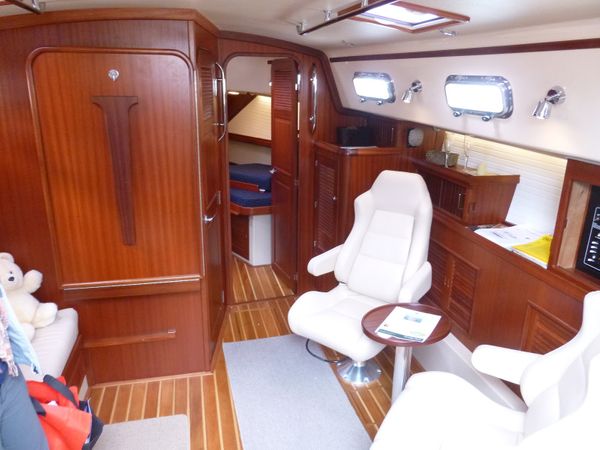 One weekend ago, we headed on down to South Lake Union for Seattle’s Boats Afloat show. Neither of us was quite sure what to expect, but we packed my

Last I wrote, we had just plunged headfirst into learning about sailing. Thursday of last week, I stepped onto a sailboat for the first time in my life. A coworker was kind enough to let us pick his brain over coffee the week before,