It all began as we were trying to pick a movie to watch on Netflix. It was a bit after nine in the evening, and we'd been anchored in Roche Harbor for over a week. I'd gone across the island earlier in the day to have a dental issue looked at and re-provision for the next two weeks. And then the Sir noticed a decently sized boat anchored uncomfortably close. Where did this mystery boat come from?

It was getting a bit gusty in the bay and this boat was swinging within 15 feet or so of our bow. The Sir rowed over to a nearby sailboat to ask the owner if he'd seen them come in. According to him, the boat had arrived in the last 10–15 minutes and anchored so close to us that our neighbor thought our family had arrived to raft up. We knocked on their hull—no answer. The restaurants and bars were about to close, so we kept an eye on the newcomer with fenders at the ready, hoping they'd just rushed ashore to make last call without making sure they were actually set and properly distanced, like so many boaters seem to do.

The boat wouldn't hit us—if conditions on the water remained constant. The wind was decently gusty but when the current switched around, our full keel would swing us right into them. Thankfully, that wouldn't happen for several hours. We tried calling the marina, the brokerage number on the back of the boat, the hotel, and texting our boater friends: No one had information that would help. We might be able to get information from the harbormaster in the morning if they'd ever used the marina. We couldn't pull up our own anchor and relocate without motoring through the area their boat was occupying, so we were stuck.

Around 11p.m., a dinghy approached. The two folks on board were rowdy enough to confirm our suspicion they'd been hitting the bar. They clambered aboard, in a panic over how close they were to us. The Sir and I breathed a sigh of relief. At least we wouldn't have to keep watch all night. Or so we thought.

We stayed up top to keep an eye on them, concerned about the gusting wind and their ability to raise their anchor and control their boat in their current state. They blew down on us, but The Sir was able to catch the attention of the younger of the two men on board in time for him to keep their boat off of our bowsprit. We fended the boat off as it blew back past us and toward the mouth of the channel that fed into the bay. They seemed to have collected themselves and moved past us to find a new place to anchor for the night.

Blackthorn jerked. And then she started moving across the bay. Two hundred or so feet ahead of us, obscured by seaweed, our anchor chain was hooked to their anchor. The Sir shouted and caught their attention. They maneuvered none-too-gracefully beside us, apologizing profusely as The Sir and I did our best to make sure no one got injured while we disentangled.

An aside from the Sir: I'd like to emphasize that the most important part of the whole mess was that we put aside feelings of anger and fear, and got into a confident, unaccusing mindset so we could keep everyone's energy focused on each step towards separating the boats without damage (to them) or grounding us. In my humble opinion, Kim stepped up as the captain of this operation stunningly and with surprising ease.

We shoved our two largest fenders between the boats, lashing them together at the bow and amidships. In the meanwhile, we were being slowly blown toward a dock near the channel's mouth in the dark. I opened up the engine seacock as soon as it became obvious that we were entangled. The Sir climbed into May and moved over toward their anchor to try and pull the chain off, but it was an impossible maneuver for one person in a moving dinghy. I hopped in and we were able to wrangle the chain over the points of their Danforth-style anchor. Everything happened very quickly, but we were able to push them off and send them on their way without further issues (that we're aware of, at least).

Our anchor had re-set itself by this point, thankfully, so we were able to take our time undoing the snubbers and getting our anchor up.  We motored around in the dark, trying to find a good place to anchor. We'd been meaning to relocate, and if that wasn't a sign, I don't know what is. It was 1 am by the time we'd repositioned. The Sir kept first watch in our new location, neither of us particularly confident about the worsening weather and our proximity to one of the other boats.  The rest of the night was uneventful for us: The Sir watched a large yacht across the harbor start to drag down on several smaller boats, but it moved into the marina before anything catastrophic happened.

I woke up to a fresh pot of coffee at 6 am and kept an eye on things while The Sir caught up on some much-needed sleep. By noon, we'd relocated to gloriously vacant Westcott Bay. It's almost the fourth of July, and the popular harbors are filling and overfilling with people ready to drink and party despite a pandemic. We'd avoided popular harbors around the holidays for the last few years, and this incident confirmed that we were very right to be so cautious. It was also a good reminder that what sometimes feels like an overabundance of caution in our anchoring practices is well-warranted. We were fortunate that things turned out the way they did: They could have been much, much worse. 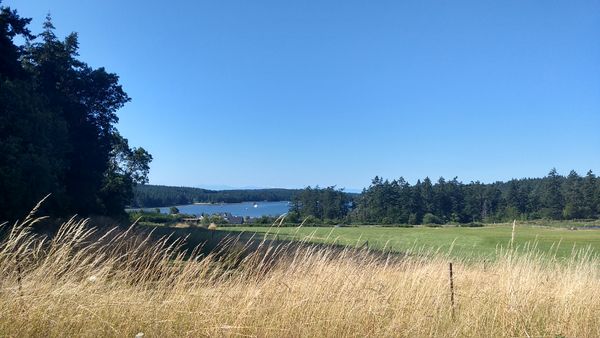 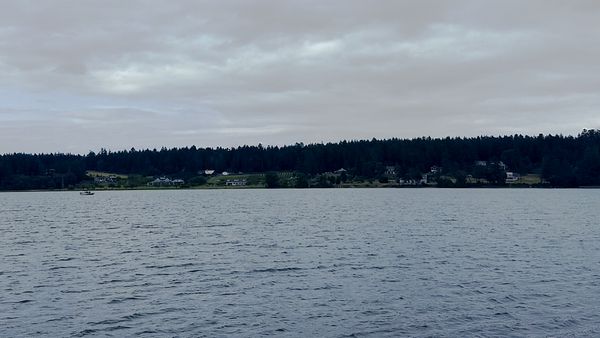 After some excitement that I'll be writing about in a separate post, we've relocated to the lovely–and much less crowded–Westcott Bay, just around the bend from Roche Harbor.