Out into the Sound

We’d gotten our engine up and running and practiced a bit of maneuvering. Now, it was time to set sail. And about time, too, given that we’d last taken Blackthorn out with Robin and Jackie near the end of July. It was the beginning of October and shortly after we’d relocated to a new slip. Zeke (The Sir’s brother) came along for what would be his first sail. We set out early in the afternoon, with winds holding steady at around 10 knots – perfect weather for a relaxing day-sail. According to the forecast, they’d pick up into the 20 knot range in the early evening, well after we’d be back in the marina.

The sky was gloomy, mostly gray and scattered with small rain-clouds – exactly what you’d expect in the vicinity of Seattle. We motored out of the marina with The Sir at the helm and pointed into the wind so that I could hoist the mains’l. Zeke was there mostly to watch and enjoy himself, only to be called on if necessary: We wanted to make sure that we could handle everything with just the two of us. On Blackthorn, pulling up the main sail requires a coordinated effort. One person adjusts the line that controls the boom’s horizontal position and generally wrangles the boom, while the other person pulls on the halyard to raise it. This is followed by raising the stays’l (middle) and jib (front) sail, which are both much simpler. On this day, we set out with just the stays’l and main, not wanting to make things overly complicated.

Outside of the marina, there’s a large bay before you begin to enter the shipping lanes that come in and out of Seattle. There’s a stretch of water a few miles across in between the mainland and Bainbridge island, which we set out across. The steady winds gave us a speed of three or four knots. As always, it was a wonderful feeling to turn off the engine, set the sails and continue under our own power, hearing little but wind and waves.  For over an hour, we cruised across the sound, giving the container ships a wide berth. At one point, we put out the jib to give us a bit more speed, and as we neared the other side, it became clear that the winds were slowly but steadily growing stronger.

Going by the Book

When we’d gone out on our sailing lessons, we’d never had the benefit of a boat with a main sail that could be reefed. Unfortunately, the boats had always had a furling main, where the sail is retracted into the mast. Both reefing and retracting the main reduce the sail area, allowing the boat to sail in higher wind speeds without heeling over so heavily. For those wondering, if a boat heels over far enough, the main sail begins to catch less wind, reducing its force – the boat doesn’t just flip over into the ocean because the wind is blowing too hard under normal circumstances. That said, having your boat heel over that much is neither comfortable nor ideal. All this to say, the saying that we heard and read countless times during our lessons was that the time to reef is when you first think about reefing. Generally, people reef late; sails become extremely difficult to manage when they are flapping around in high winds.

We couldn’t remember what the thresholds were for reefing, but we decided to go ahead and put in a reef as the winds were gusting somewhere in the neighborhood of 18 knots, with Blackthorn heeled well over and the sky decidedly more ominous than just overcast. Before we could reef, we needed to change course, as we were now nearing the opposite side of the channel.  We brought the boom in and tacked through the wind as The Sir and Zeke adjusted backstays and I focused on remembering how the reefing process was supposed to work. It was shortly after we set off to the southeast that Zeke heard a strange noise. Initially, he thought one of us had sneezed. To our surprise, a pod of harbor porpoises had begun surfacing aft of the boat, creating little sprays of mist as they sharply exhaled from their blowholes. Unfortunately, we had little time to appreciate their sudden appearance.

We kicked on the engine and The Sir kept Blackthorn head-to-wind as I lowered the main and began reefing, enlisting Zeke to help keep the sail under control as I secured the foot of the sail in its new position and tied the reef knots before re-tensioning the halyard. The operation took several minutes, The Sir working all the while at the helm to keep Blackthorn from swinging back into the wind. Main reefed, we resumed our course, this time pointed back across the channel. The porpoises continued to surface periodically, a welcome sight among the waves.

As we continued on, the winds didn’t let up. Instead, they grew stronger. Blackthorn was making good time, but was also heeled over uncomfortably on the increasingly rough seas. Soon after the first reef, we brought the boat around for a second. We repeated the process, this time with greater difficulty. Whenever the wind would catch the main, even slightly, it became impossible to lower until the boat was pointed back into the wind. The forces at work were substantial, and it was abundantly obvious to me that carelessness could result in broken bones or much worse. Zeke was put to work tying any knot that would secure the reef. If I recall correctly, by this time the winds were sustaining speeds around twenty knots and gusting higher.

I remember looking around and thinking that the skies and seascape were barely recognizable from when we had set out. The sky was dark and dense in all directions, though it hadn’t begun to rain on us yet. I was uncomfortable sailing more with the weather continuing to worsen, and after a short discussion, we decided to drop the sails and motor back. Our intention had been to show Zeke how pleasant sailing could be, not to traumatize him. We were more than halfway back to the marina, and with the water completely devoid of other boats, there was little concern about traffic. Dropping the sails sounded simple enough, but as with so many things, the reality was a bit more complex.

With The Sir on the helm and doing his best to keep the boat head-to-wind, we worked on bringing in the jib. A small line wraps around the furler as the sail is pulled out, and to re-furl the sail, this line is hauled on, wrapping the sail back around itself. In order to fit around the furling drum, the line is a smaller diameter, which causes it to bite into your hands when you try to pull on it while under tension. It took both Zeke and I hauling on it with as much strength as we could manage to get the jib back in. Zeke pulled the rope inward to create some slack, while I wore gloves and focused on pulling it in. With the jib in, it was time to get the stays’l down. This involved going forward to the bow of the boat, which was crashing through sizable waves, the bowsprit becoming periodically submerged.

There was definitely some adrenaline in my system as I reached the pinrail amidships where the stays’l halyard was secured. I pulled it off the pin and handed it to Zeke, going cautiously forward to pull the sail down onto the A-frame where it could be secured. The boat was moving noticeably underfoot, the wind was gusting, and the sea was dark and turbulent. As I pulled the sail down, a wave crested over the bow, drenching me from the waist down and splashing Zeke, who was still back amidships. The experience was exhilarating. Of course, my excitement was tempered with the knowledge that we still needed to make it back to the marina and moor Blackthorn in her slip.

After a few minutes at the bow and some help from Zeke with the stays’l sheets, the sail was secured to the railing. I also handed the unclipped lead of the halyard to Zeke with no explanation, which he duteously hauled on until the other end was nearly pulled through the block. Thankfully, my failure to communicate and secure the other end was a problem that could be resolved later. We finished lowering the main with a bit of effort and motored back toward the marina with the wind gusting heavily, grateful that we had decided to call it a day.

Within the safety of the marina, the wind and waves were substantially weaker, but it was by no means calm. All of us were running on adrenaline. The wind was blowing against the entry into the fairway and onto our slip at an angle. Because of the unpredictable gusts, we went up the fairway, turned the boat around, and then approached the slip with the wind coming in over the stern on the port side. With The Sir still at the helm, we made a first pass at the slip. The wind gusted, picking up as we were getting close to the cut off for our turn and blowing us too close to make it in time. Zeke and I spotted with boat hooks at the ready while The Sir kicked it into reverse to make another pass. A liveaboard across the way heard the engine gunning and came up top to spectate and offer assistance if needed. It took several attempts, but eventually we made it into the slip and tied off. The three of us ranged from damp to drenched, and we were all thoroughly frazzled by the time we stepped onto the dock.

As a whole, it was a great experience. Things didn’t go at all how we’d planned or expected, but we got some good practice under our belts and got a feel for the realities of how quickly things can change out on the water and how Blackthorn sails in moderate winds. 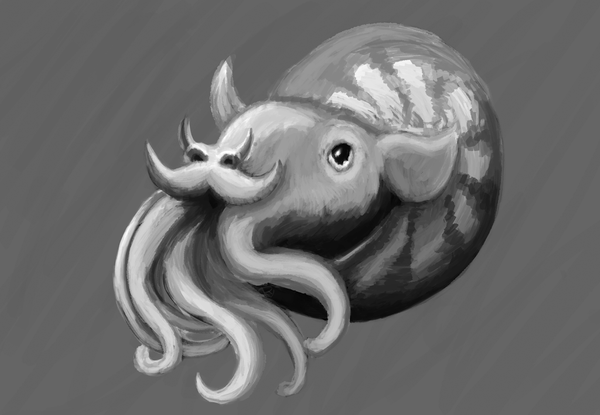 What’s this about Riddles? For those unawares, I run a Riddle of the Month challenge over on Patreon (where you can also find the high res versions of sketches)

The Wonder of Deadlines Once we had the boat fully reassembled, we did a lot of dawdling. There were some minor engine issues, and the wind instrument needed replacing. We waited for parts and put off getting the wind instrument up, worried about sending